Band Advice – 6 Ways To Separate Your Band From The Rest 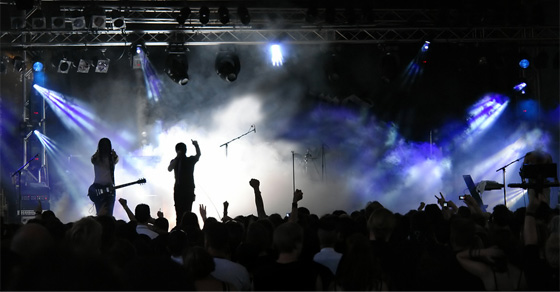 Here are a few tips that we learned while talking to many successful bands all over the country.  Although each market has its own particular characteristics, these basic tips work in EVERY city that where it‘s been tried.  Please read the tips and USE them!

1 – Book no more than 1 show every 4-6 weeks.    When starting out as a band, bands often get used to hearing “no” for so long that once they are offered shows they start taking everything that comes across their plate.   What happens at this time is that bands that were able to draw 50-100 people for every event now is able to draw only 15-30 for each show and thus losing their appeal and quickly gets burned-out.  Booking once every 6 weeks will create demand and make it easier for your band to become a band that is known to draw 100+ people per show.

2 – Promote your show by selling tickets directly to your fanbase.   Many bands find this method to be the most useful in gauging their progress as a band.  This one tip ensures many things like – your band getting credit for every person that comes to see YOUR band, and to see if your band is gaining more fans and becoming a band that is in great demand locally (which can give you leverage with promoters and venues in getting better gigs as well as better payouts).  In addition, it makes it much more likely, that your fans will show up because they already made a commitment by purchasing a ticket to your show.  Now for those bands that think they’re “too big” or they “don’t know our fans personally” to sell tickets, remember that major artists and entertainment companies use advance ticket sales such as: Christina Aguilera, Justin Timberlake, Rage Against The Machine, Black Veil Bride, Butcher Babies, Killswitch Engage, The Cleveland Browns, San Antonio Spurs and many others.  Now if THEY can presell ticket to their event, then so can local bands.   You just may need to rely on your email list and create an online box office (like PayPal, Sqaure, etc) free of charge.  It’s easy and takes a total of 5 minutes to set up.

3 – Make every show its own Special Event.   Fans love freebies, like a 1-song demo with each ticket stub coming thru the door.  This idea is probably one of the best ideas we’ve come across and is almost fool-proof for a great turnout.  If your band has too few funds for a demo, bands can also use bumper stickers, pins, buttons, or window stickers, as a replacement for the demo… plus it is a walking advertisement for your band.

4 – Have an email list and ALWAYS grow it!   This is a great (and free) way to monitor your fanbase and see it’s growth.   A band can quickly grow to a list of 300 people and our math has shown that with each email sent out, the band will receive a 10% response from the fanbase for coming to the show or buying a ticket in advance.    That is around 30 people just from one tool in your arsenal.   Another new method bands are using is free text messaging services and apps to keep their fans in the loop.  I personally think this is a GREAT way to use new technology because an email may go to your spam folder but as soon as you send a text, you KNOW that the person received it and read it.

5 – Rehearse at least 3 times a week.   This will show when you guys hit the stage and get you that “wow factor” that will take your band from being a band playing in front of their own fanbase and to turning the heads of the other band’s fanbase as well as the bar manager and other talent buyers.  THESE bands are the ones that quickly rise to the top and have longevity.

6 – ALWAYS be professional and network with everyone!   That advice is great for bands, venues, talent buyer, and other production companies.  You never know who they know or where they will be in a year or 2.

If you would like to share any band advice that has worked for your band, please email us at info(at)RogueNationMedia.com.